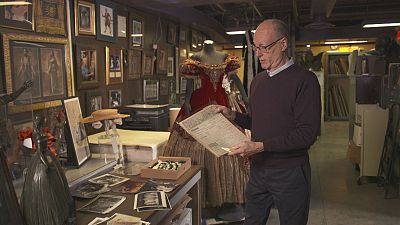 Verdi's "La Traviata" is the third-most-performed opera at the Metropolitan Opera of New York.  Many female singers have played Violetta during more than a century in over 1000 performances.

During this filming of Musica, Euronews went behind the scenes at the Met, with archive director Peter Clark, who took us on a tour of the company's treasure trove.

Clark began by showing us a past programme of "La Traviata": "Here is the programme that we have from the Met's first season: November 5th 1883. The Violetta was Marcella Sembrich. She was a very famous Polish soprano who ended up doing the role many, many times." Programmes and costumes

Costumes and past performers

Clark adds: ''Part of our collection is a big costume collection. Until about World War II the lead singers owned their costumes. This costume was for Bidú Sayão, a famous Brazilian soprano who first sang the role of Violetta in 1937 at the Met. She was very charming and beautiful and she was a favourite with the audience for a long time.

"Another famous soprano who sang Violetta here was Lucrezia Bori. She was immortalised in bronze here. you can see her holding the Camellia there. So this is her as Traviata as well.

"Amongst the other singers who have done this role: The one who did it the most: Licia Albanese, who did the role 87 times at the Met. She actually left us her jewellery that she used on stage for this part which is right here."

"In 1956-57 the Met did a new production with the soprano Renalda Tebaldi. She was the principal rival to Maria Callas. So the year after, Callas came to the Met, but she hated that dress. We have a lot of correspondence about how much she didn't like the dress. So they remade the dress for her and here she is in the dress."

Clark ends by showing us a costume worn by Enrico Caruso: "This is a costume of Enrico Caruso. This was his costume as the Duke in Rigoletto. It was his debut in 1903 at the Met. Caruso was THE main box office attraction at the Met for many, many years and of course one of the most famous singers of all time."