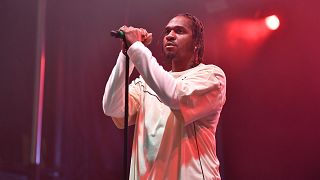 Three people were hospitalized Tuesday night after a brawl broke out at a Pusha-T concert in Toronto, leading the rapper to blame Drake for the incident.

Pusha-T was performing at the Danforth Music Hall in Toronto — Drake's hometown — on Tuesday night, when members of the crowd began to throw liquid on stage.

Videos posted online showed several people on stage appearing to attack a person. On Twitter, Pusha-T said he wasn't the one being attacked. Other videos of the moment show what appear to be Pusha-T's bodyguards fighting back the attendees who rushed the stage. It is still not entirely clear what transpired on stage.

Pusha-T eventually returned to the stage, claiming Drake paid people to disrupt the concert. He then went on to perform two more songs.

There's been no shortage of bad blood between the rappers, who have released several songs taking aim at one another over the last few years.

Drake declined to comment to NBC News about the incident.

Police were called to the theater around 10 p.m. ET, according to Toronto Police Service spokesperson Katrina Arrogante.

Out of the approximately 1,400 people in attendance, only a few were injured and three people were transferred to a local hospital for non-life-threatening injuries, Arrogante said.No arrests have been made, Arrogante said.