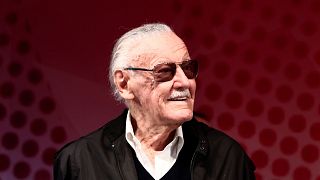 Stan Lee was given a superhero's sendoff.

The genius behind Marvel's powerhouse comic book creations such as Black Panther and Spider-Man, has spawned hundreds of emotional reactions on social media as the actors and actresses who brought the fictional characters to the big and small screen share their condolences.

"There will never be another Stan Lee. For decades he provided both young and old with adventure, escape, comfort, confidence, inspiration, strength, friendship and joy," actor Chris Evans tweeted Monday.

Evans plays Captain America in the "Avengers" films and was also the Human Torch in the two "Fantastic Four" movies.

"He exuded love and kindness and will leave an indelible mark on so, so, so many lives. Excelsior!!" Evans added.

"Iron Man" star Robert Downey Jr. shared a photo on Instagram of him with Lee, writing in the captain: "I owe it all to you,,, Rest In Peace Stan."

Lee, 95, known as the godfather of Marvel Comics, died in Los Angeles Monday, his representative Dawn Miller confirmed. Lee, whose real name was Stanley Martin "Stan Lee" Lieber, began his career as an office assistant at Timely Comics in 1939 before it was renamed Marvel Comics.

Lee went on to help create fan-favorite characters like the X-Men, Dr. Strange andThor, which all went on to be huge box office successes — which usually featured a cameo by him.

Hugh Jackman, who played Wolverine, one of Lee's most recognizable characters in the comics and on the big screen tweeted: "We've lost a creative genius. Stan Lee was a pioneering force in the superhero universe. I'm proud to have been a small part of his legacy and .... to have helped bring one of his characters to life."

Deborah Ann Woll, who plays Karen Page on Netflix's "Daredevil," also shared her condolences, writing: "What a wonderful gift you have given us in the characters you've created and the love and passion you had for your fans," she posted.

Theo Rossi, who starred as Shades in Netflix's "Luke Cage," thanked Lee for his childhood and one of his "favorite jobs to date."

Marvel said in a statementthat Lee was as "extraordinary as the characters he created."

"A super hero in his own right to Marvel fans around the world, Stan had the power to inspire, to entertain, and to connect. The scale of his imagination was only exceeded by the size of his heart," said Bob Iger, Chairman and CEO, The Walt Disney Company.