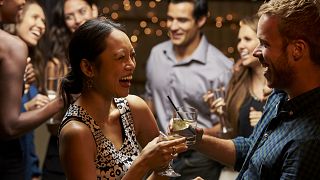 Storing foods in the fridge or freezer makes them stay fresher for longer, but there may just be something taking up real estate in the freezer right now that actually doesn't belong there.

For anyone who has ever wondered why a cocktail made at home doesn't taste as good as it should (or as good as it does when a professional bartender whips it up), it may come down to where the vodka, gin, tequila, whiskey or bourbon is being stored.

"No spirit should ever be stored in the freezer if you want to use it in a cocktail," Jason Cott, bartender and co-owner of Pouring Ribbons and Alchemy Consulting in New York City, told TODAY Food.

One reason to never freeze alcohol is that "making it super cold takes away some of the flavor and makes it lose its botanicals and floral essences," Cott said.

Another reason not to ice out those liquors is that spirits that have been frozen do not create balanced cocktails.

"A frozen vodka will not interact with the ice appropriately and will not create the correct water dilution to temper the proof of the alcohol and create the most balanced and delicious cocktail," Cott said.

For example, he noted that in a vodka cocktail, the vodka should be responsible for melting the ice. "If the vodka is frozen, it will not melt the ice efficiently," he said.

Only a room temperature vodka will be able to create the correct water content in the cocktail, and "water content is the hidden ingredient in every cocktail" that makes it balanced, he explained.

There's only one time when it's appropriate to freeze vodka.

"If you are drinking vodka shots with caviar and blini, I would highly recommend drinking it ice cold right from the freezer," Cott told TODAY Food.

There are a few spirits that should be stored in the refrigerator, but vodka, gin, tequila, whiskey and bourbon are not among them.

Placing wine-based spirits in the fridge will extend their life span, but everything else will keep its flavor best by being stored on a bar or counter at room temperature and away from lights, including florescent lights and sunlight.

Even though frozen liquor shouldn't be used for crafting upscale cocktails, it's just fine to get into the spirit of the holiday season with festive, ice-covered alcohol bottles. They're fun, they're easy to make and they keep bottles cold throughout the party so you're not constantly opening and closing the freezer door.