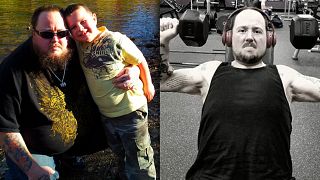 As an overweight child, Gary Hill was bullied. This made him angry and led him to start bullying others, but then a high school football coach noticed his hulking size and encouraged Hill to become a linebacker.

Football gave Hill outlets for many of his vices: He could continue to eat poorly and be overweight, and he could deal with his anger on the football field. Plus, the sport helped him make new friends.

"I liked the attention because it was a lot better than being picked on," the 38-year-old from Columbia Heights, Minnesota told TODAY. "I thought, 'It is OK being this big. People like me now.'"

While Hill continued to eat poorly, playing football kept his weight down. He weighed about 350 pounds at 5 feet, 11 inches tall. But after graduation, his weight increased as his activity levels dropped. He soon weighed 523 pounds.

"Eating fast food is just as addictive as any drug. We find comfort in it. It is very easy to overindulge," he said. "I just didn't have motivation."

By his mid-20s, Hill suffered a heart attack, but even that didn't encourage him to change.

About a year later, he reunited with a childhood sweetheart and she encouraged him to pursue his dream job in loss prevention in retail. When he went for a meeting, Hill overheard one of the interviewers say that Hill was toounhealthy to do the job. He was devastated.

"Just hearing that kind of crushed me. That was one of my dream jobs," he said.

Instead of continuing his bad habits, he started going to his local Planet Fitness in June 2015. He began with cardio for an hour a day and he swapped out fast food and soda for fruits, veggies, lean protein and water.

"I eat two cups of fruit every morning. I stay away from sugar as much as I can," he said.

These diet and exercise changes added up, and he steadily lost weight. But he also noticed that his mood improved.

"When I was heavy and battling obesity you feel like you can't do anything. You feel worthless," he said. "My outlook on life is so different now."

From 2015 to June 2018, Hill shed 300 pounds and now weighs 220 pounds. He added weight lifting into his exercise routine to build muscle and plans to lower the percentage of body fat he has. But for now, he is happy.

Hill shares advice for others hoping to shed weight.

When Hill first started focusing on weight loss, he'd constantly weigh himself. If he gained weight, he felt depressed.

"The scale is not your friend. I was so obsessed with the scale," he explained. "It would almost take away from the motivation. Once I started staying off the scales I noticed real changes."

Instead of focusing on the weight on the scale he focused on how his clothes fit or how much more energy he had.

For Hill, having a cheat day is important. He noticed it helps him have fewer cravings. If someone has birthday cake at work, for example, he'll enjoy a slice and not feel guilty.

"If I completely cut everything 100 percent I would just crave it more," he said. "I will have that piece of cake on my cheat day. I don't think about it for another couple weeks."

Even though Hill feels happy that he lost 300 pounds, he still keeps setting new goals for himself. He wants to lower his body fat, but he also sets modest goals, such as doing 30 pullups instead of 20.

"I feel like I've got so much more to do," he said. "Always having a goal is important to maintain."

When Hill began losing weight, he would reward his success by buying new clothes. This helps him celebrate and serves as a tangible reminder of how well he is doing.

"I love going out and getting new clothes … A lot of people don't realize that when you are that big you can't go to the stores and buy clothes," he said. "I reward myself by getting those clothes. That is what motivating me."

"The biggest thing is to not give up. You are going to fail," he said. "I fail all the time. You need to dust yourself off."

For more inspiration, check out our My Weight-Loss Journey page. If you're ready to start your own journey, sign up for our Start TODAY newsletter for extra support.