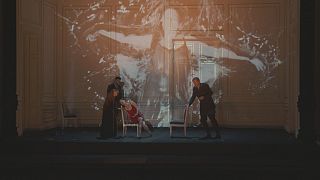 The curtain has risen on a World premiere at the Palais Garnier. The Paris opera is celebrating the 350th anniversary of its foundation with a new masterpiece, "Bérénice" by Michael Jarrell.

The complex title role is interpretated by the soprano of contemporary music,  Barbara Hannigan.

"It's very interesting because Bérénice is such an important play in French culture. She's such a strong character," says Hannigan.

The score was tailor-made for the Canadian artist.

“When I looked at the score for the first time, I thought yes in many ways this is clearly written for me. It's got all the virtuosity that I like to do. It has my high notes, my low notes but it is very much the imprint of the composer, which is super, super strong and through that I have to become the character that he has created.”

The composer Michael Jarrell says he sought to have an evolving voice in the work.

"At the start it is very poised and stately, but very quickly there is another manner of singing that erupts, that is very anxious, with little codas that repeat in a reflection of her anguish. She begins to understand that she is losing control," says Jarrell.

At the heart of this opera is the tragic love between the queen of Judea, Bérénice, and Titus who choses his duty to Rome over her.

Stage director Claus Guth focuses on the depths of the characters.

"I have tried to show the inner conflicts of the protagonists and I tried to look as deeply as possible into their souls," says Guth. "And therefore I wanted to show that Bérénice intuitively knows from the beginning that she will fall, that she will lose and that's why I have integrated throughout the piece something like short flashes that show that deep inside, she knows she is doomed."

Beyond the music, establishing the character is vital in any opera, something Hannigan is keenly aware of, and strives towards.

"I'm really in a constant search for who is this Bérénice and what is her relation to Titus, who she loves and also what is her soul?"

"At the end it is a music that disappears, something that fades away, it resonates. It's the music of a goodbye," says Jarrell. "The fact that there are no possibilites gives it a certain poetry of strong love, it's something very pure, supernatural."

Although tragedy is at the heart of the work, Hannigan maintains that something eternal and undying emerges at the end.

"Berenice decides that she has to leave Titus and so I like this kind of fading away because the love doesn't die. The human being doesn't die. The relationship doesn't die. And yet something fades away and that I find very poetic," she concludes.

Performances of "Bérénice" at the Palais Garnier in Paris run through October 17th.