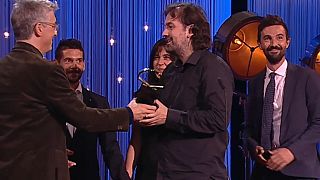 Since its creation in 1953, Spain's star-studded San Sebastián film festival has emerged as one of the most prestigious in the Spanish-speaking world. The top prize went to Spanish director Isaki Lacuesta for "Between Two Waters". It is the second time the Catalan filmmaker has won the award, after 2011’s "The Double Steps".

Another highlight was Argentina's "Rojo" which took home the awards for best director, best actor and best cinematography.

The Silver Shell for best actress went to Pia Tjelta's intense performance in "Blind Spot". The drama follows a family after their daughters suicide attempt.

Two films tied to win the best screenplay award 'Yuli' and 'A Faithful man'.  The special jury prize went to 'Alpha: The Right To Kill', by Filipino Brillante Mendoza.