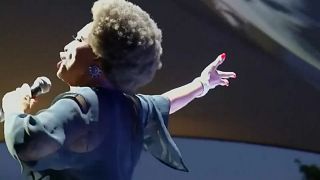 Detroit said one final goodbye to the singer known as the "Queen of Soul". Aretha Franklin died last week at the age of 76 after a long battle with pancreatic cancer.

Her soaring voice would become the inspirational standard for other singers to match.

Some of the performers set to sing at Friday's funeral service, included Steve Wonder, Ariana Grande, and Chaka Khan. Reverend Jesse Jackson and former President Clinton are scheduled to speak at the ceremony.