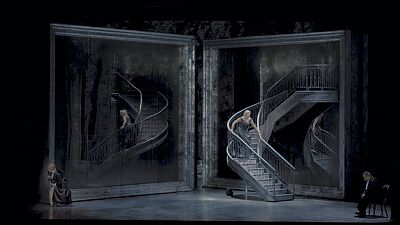 A beautiful English country house in East Sussex, with an elegant audience enjoying a lavish picnic in glorious sunshine, that is the sumptuous setting of the unique opera festival, Glyndebourne.

Inside the mansion, on stage, it is eternally cold and hauntingly dark in Samuel Barber's 'Vanessa', a spellbinding opera from the age of Hitchcock, that had it's world premiere 60 year's ago.

Stage director Keith Warner says the music merely enhances a powerful narrative: "This is a piece that could almost play not as a musical but could be played as a play and it has this wonderful opera music on top and really lures the audience in to a very dark and mysterious story."

The story unfolds in a house frozen in time. Vanessa, brought to life by British soprano Emma Bell, has been long-abandoned by her lover, Anatol. She has covered all the mirrors, shutting herself away, waiting for his return. But when, decades later, Anatol’s young son arrives unexpectedly her world is turned upside down

"I mean imagine if you had waited 20 years for somebody and they are about to walk through the door. You are at your most vulnerable," says Bell.

In Warner's ingenious and visually stunning staging gigantic mirrors loom over the characters. "There are endless reflections, there are endless things you see in it, says Warner: "You can see yourself now. You can look in it through the mirror to the past and also you can see, as it were, your life and the life around you reflected. You can almost stand back and see almost in an analytical way, what's going on."

Bell says the acoustics created by the mirrors give the production an epic aspect: "We can use these mirrors to see through, to create another world behind the gauze. There is no question that the sound world is epic, it is cinematic, huge arcs of sound and extreme highs and lows, it's a vast, vast world, a huge colour palette."

For conductor Jakub Hrůša, the ensemble of the sound gives the opera a uniquely American feel: "It is clear, it is an American opera because of the sound world, especially the brass' sounds, the rhythmical essence and also sweetness of melodies. It shifts all the time so you are constantly provoked to be involved."

Warner believes a kind of beauty emerges through the dark ambience of the opera: "I think it is dark in that the human psychology of the piece is dark. But I hope it is also very elegant and beautiful because in a way you have to have an almost superficial sheen on this world in order that there is something that you can read and register the darkness beneath."

Vanessa is running at Glyndebourne Festival 2018 from 5 – 26 August 2018. The production will be broadcast live in cinemas and for free online at glyndebourne.com at 6.30pm on Thursday 14 August.