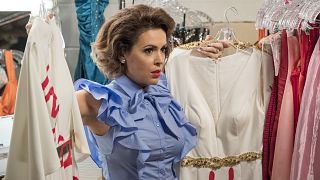 The stars of an upcoming Netflix series about a teenage girl who goes from overweight outcast to thin beauty seeking revenge have defended the show amid a wave of backlash.

Actresses Alyssa Milano and Debby Ryan, both of whom star in the dark teen comedy "Insatiable," which debuts on Netflix on Aug. 10, posted on Twitter in defense of the show after droves of online commenters said the series appeared to be fat-shaming its lead character while playing into a dangerous narrative.

"We are addressing (through comedy) the damage that occurs from fat shaming. I hope that clears it up," Milano responded to a Twitter user who called the premise of the show "digusting." However, many of the responses to Milano's tweet still decried the series as tone-deaf.

"Insatiable" tells the story of Patty (played by Ryan), a teenager bullied at her high school for the way she looks. In the newly released trailer, other students refer to Ryan's character as "Fatty Patty" and post pictures of her face on a pig's body on her locker.

One summer, Patty gets her jaw wired shut, loses weight and comes back to school looking unrecognizable and conventionally attractive. She decides she can join any clique in the school but instead wants revenge on her bullies. Patty is coached by failed attorney Bob Armstrong (played by Dallas Roberts), whose true aspiration is to coach pageant queens. Milano plays Bob's wife, Kimmy Shields.

The show's tagline bills the series as, "A coming of rage story."

On Saturday, Ryan posted a long statement on Twitter saying that she was excited to work on "Insatiable" because the series tackles the shame women feel about their bodies through satire and "enter difficult conversations."

"Twelve years after my own struggles with body image ... I was drawn to this show's willingness to go to real places about how difficult and scary it can be to move through the world in a body, whether you're being praised or criticized for its size, and what it feels like to pray to be ignored because it's easier than being seen," Ryan wrote.

Ryan also said that she and the show's writer and showrunner, Lauren Gussis, felt it was important that in scenes where Patty was heavier, her size was not used "as a punchline" and the abuse the character suffers is never justified.

Gussis also put out her own statement on Twitter, saying that she was suicidal as a teen and that she wanted revenge on her own bullies. She said this caused her to develop an eating disorder and "the kind of rage that makes you want to do dark things."

"This show is a cautionary tale about how damaging it can be to believe the outsides are more important — to judge without going deeper," Gussis wrote. "Please give the show a chance."

"What purpose do the false sexual assault accusations in the script serve, though?" actress Mara Wilson wrote, seemingly responding to an undisclosed plot line in the show.

In a Twitter thread, Nabela Noor, a beauty vlogger, wrote that the trailer "repelled" her, and asked for a show where an overweight girl loves herself as she is.

"How in any world is weight loss from a jaw being forced shut inspiring? Do they know what implies?" Noor wrote, adding in her final post that she hopes the show will still surprise her.

Netflix, which declined to comment on the backlash around "Insatiable," recently received criticism from mental health experts following the debut of the second season of its original series "13 Reasons Why." The first and second season of the series had graphic depictions of suicide, sexual assault, drug use and gun violence, all involving teens.