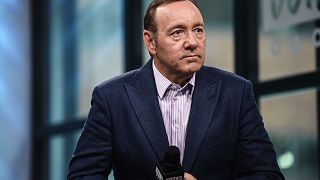 The allegations against Spacey, the former artistic director of the Old Vic theater in London, were first reported by TMZ and later confirmed by police to Variety.

London's Metropolitan Police had previously confirmed three other investigations against Spacey, bringing the total to six.

British police, who do not publicly identify suspects in many crime cases, provided NBC News with details about the three new allegations that matched those in the TMZ report, but didn't name Spacey.

Officials with Scotland Yard's Child Abuse and Sexual Offenses Command are investigating the accusations, police said in a statement.

The news comes amid news from a recent interview with actor Guy Pearce, who co-starred with Spacey in the 1997 noir thriller "L.A. Confidential."

"Tough one to talk about at the moment," said Pearce, who is Australian. "Amazing actor. Incredible actor. Slightly difficult time with Kevin, yeah. He's a handsy guy. Thankfully, I was 29, and not 14."

"Star Trek: Discovery" actor Anthony Rapp accused Spacey of making a sexual advance at him in 1986, when Rapp was 14 and Spacey was in his mid-20s.

Spacey, now 58, issued an apology after Rapp's allegations were reported by BuzzFeed.

He then virtually disappeared from Hollywood. He was fired from the Netflix series "House of Cards" and cut from the film "All the Money in the World."