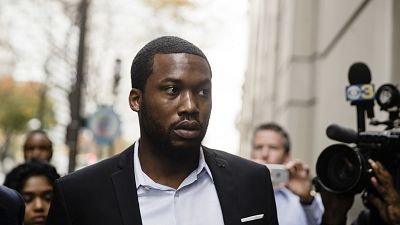 A Philadelphia judge has denied rapper Meek Mill a new trial stemming from the decade-old gun and drug charges against him — despite new information that shows credibility issues with the arresting officer.

Common Pleas Court Judge Genece Brinley said in a 47-page opinion released Monday that Mill's attorneys "failed to meet his burden of proof" to have his conviction overturned, and questioned the thoroughness of Philadelphia prosecutors reviewing allegations of corruption against the officer.

The decision — the latest in a case that has put aspotlight on the justice system and sentencing — was blasted by the defense.

"We are not at all surprised by Judge Brinkley's decision today. Despite the agreement of the District Attorney's office on the need for a new trial, and the granting of new trials to other identically situated defendants, Judge Brinkley made clear during the hearing on June 18th that she had already decided the matter," Mill's lawyer, Joe Tacopina, said in a statement.

He added that he plans to take the case to a higher court of law.

Mill, 31, whose legal name is Robert Rihmeek Williams, has been out of prison since April, when the Philadelphia Supreme Court ordered him releasedon bail. Mill served five months after Brinkley sentenced him in November 2017 to a two- to four-year sentence for a probation violation.

She said her decision to sentence the "Maybach Curtains" rapper came after she gave him multiple chances: In 2017, Mill was arrested two times, once for allegedly popping a wheelie on a motorcycle in New York City, and then for a separate altercation at a Missouri airport. While both charges were dismissed, he was still found in technical violation of his probation.

Brinkley also cited a failed drug test and unapproved travel after the 2008 gun and drug case for her sentencing decision.

In an interview in May, Mill told NBC News' Lester Holt that the "unapproved travel" is from visiting and dropping off his son in New Jersey from his New York home.

The Philadelphia district attorney's office said it supported a new trial for Mill after one of the arresting officers in his case, Reginald Graham, landed on alist of officers suspected of lying in court and framing witnesses. Another former officer who took part in Mill's arrest said Graham lied under oath during the rapper's initial trial, according to a court affidavit.

Graham could not be reached for comment about the allegations.

In April, a judge threw out the convictions of three men who had been arrested by Graham — giving Mill's team confidence that his appeal for a new trial would be granted.

Mill's request to have Brinkley removed from his case altogether was previously denied.

"We continue to believe that this miscarriage of justice will be corrected upon further review, and that the public's confidence in the impartiality of the judicial system in Pennsylvania will be restored," Tacopina said.