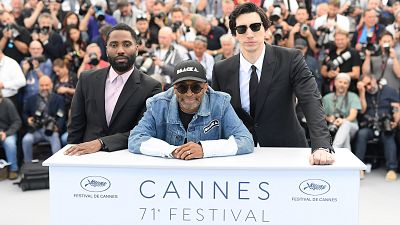 Spike Lee's latest movie, "BlacKkKlansman," debuted at the Cannes Film Festival on Monday night to a standing ovation, with attendees reportedly breaking into applause several times throughout the screening.

The movie tells the true story of how a black police detective infiltrated the Ku Klux Klan during the 1970s.

Several critics have already hailed "BlacKkKlansman" as Lee's best effort in years, highlighting its use of satire, humor and sobering racial tension to tell a story very much relevant in 2018.

John David Washington stars as Ron Stallworth, the real-life detective who responded to an ad in a newspaper recruiting members of the KKK. A Jewish officer, portrayed by Adam Driver, is Washington's partner on the force who helps pull off the undercover operation by "standing in" as Stallworth at Klan meetings and rallies.

Oscar winner Jordan Peele helped produce the film. It is Lee's first competition entry at Cannes since "Jungle Fever" debuted in 1991. ("Girl 6" was shown in 1996 as a "special screening.")

According to Variety's Ramin Setoodeh and Brett Lang, Lee will be a "strong contender" for Cannes' best-director prize.

Lee, 61, has been a vocal critic of President Donald Trump's policies and handling of racial issues, which he sees as discriminatory to black Americans and people of color in general. "BlacKkKlansman," some critics say, is in many ways a rejection of what Lee views as Trump's America.

At a news conference Tuesday, the filmmaker fiercely criticized the president's handling of the white supremacist rallies in Charlottesville, Virginia, which resulted in the death of 32-year-old Heather Heyer and dozens of injuries. Trump said the rallies included "some very fine people on both sides."

The president, Lee said, failed to fully denounce the KKK, members of the alt-right and Nazis who had gathered to protest the removal of a statue of Confederate Gen. Robert E. Lee last August.

"It was a defining moment," Lee said in an expletive-filled monologue that lasted five minutes, according to people who were in the audience." And he could have said to the world, not just the United States, that we were better than that."

"BlacKkKlansman" concludes with a montage of the chaos that erupted in Charlottesville, including a graphic scene of Heyer's death, which Lee said he included with the permission of Heyer's mother.

The movie's official release date of Aug. 10 was timed to coincide with the anniversary of the Charlottesville rallies.

Watch: Teen pilot due to land in Belgium after record-breaking flight

New Zealand says it won't use lockdowns when Omicron spreads