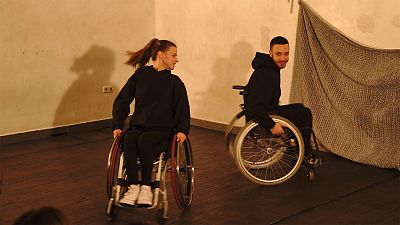 Performing in the shadows

It's a special night out for the few dozen people queuing outside this door, in a quiet street of Minsk, the capital of Belarus. They've come to see a performance by the "Belarus Free Theatre". It's a renowned company in the country, despite operating underground.

It's plays have long been prohibited by the regime of Alexander Loukashenko. The theatre has had to move house several times, before settling in a converted garage.

The theatre is now tolerated, but only unofficially. It's founders are in exile in London. Before each performance, they greet the public through skype.

Staged that night is a play about disability, titled "House Number Five".

Among the actors is Sasha Chichikova, who was elected the first Miss Wheelchair World in Warsaw last year. She tells euronews about the kind of impact they hope to make with their performances.

Social issues like sexuality and political repression, nothing is taboo in the Belarus Free theatre's plays.

Kyril Kalbasnikau is both an Actor and a Journalist. He says, "We are political, we are sharp, and we are critical to everything which is happening here. So authorities don't like such things."

Here, there's no entrance fee, no ticket office. The company lives off donations. The company decides it's the only way to avoid censorship, as imposed on other official theatres.

Pavel Gorodnitskij is an Actor as well as a Musician. He explains why it's so important the arts industry continues to be inventive and daring despite the opposition that exists.

Pavel says; "There are commissions, looking for what kind of play you perform. If there's nudity in scenes, if there's strong language and so on. In our official State theatres, they almost live in a parallel reality, where there's no strong language. There is nothing! Everything is beautiful, Tchekov, Shakespeare and so on."

He continues; "We don't want to be part of this game, like an entertaining theatre. We want to be a creative theatre which wants people to think about what surrounds them."

On 25th March, some of the company's members moved out of the shadows. Their performance opened the first official celebrations of the 100th anniversary of the proclamation of the Belarus People's Republic.

But Kyril, like many of his fellow citizens, is under no illusion about the political realities of a country where freedom of expression is still more than restricted. He explains to euronews why the performance was such a momentous occasion.

He says; "It's the first time the BFT could perform in such a massive event, and we have not been censored. It's actually a new step in political life I think. Maybe it's too early to say".

Kyril continues to say; "Personally I don't want to start a family here, because we still don't have the most progressive society. It's a sad thing, but I'm working to change this stuff!"

Is Belarus looking east or west?