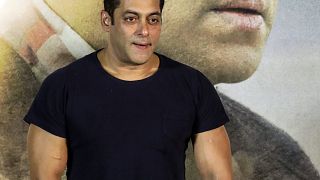 Bollywood actor Salman Khan poses for photographs during the trailer launch of his movie 'Tubelight' in Mumbai, India on May25, 2017.   -  Copyright  Divyakant Solanki EPA
By Euronews  with NBC News Entertainment  •  Updated: 05/04/2018

NEW DELHI — Bollywood superstar Salman Khan was convicted Thursday of poaching rare deer in a wildlife preserve two decades ago and sentenced to five years in prison, with the trial judge describing him as a "habitual offender."

The busy actor contended he did not shoot the two blackbuck deer in the western India preserve in 1998 and was acquitted in related cases.

He was in court for the ruling in the western city of Jodhpur on Thursday. After the verdict, police took him to a local prison. His attorneys are expected to appeal his conviction in the state High Court and seek bail for him this week.

Khan, 52, has starred in more than 90 Hindi-language films, but also has had brushes with the law.

He spent a total of 18 days in prison in 1998, 2006 and 2007 in the poaching cases, but was freed on bail, the Press Trust of India news agency said. He had been sentenced to prison terms of between one and five years in related cases before being acquitted by appeals courts for lack of evidence.

Four other stars also accused in the case — Saif Ali Khan, Sonali Bendre, Tabu and Neelam — were acquitted by Chief Judicial Magistrate Dev Kumar Khatri. They were in the jeep that Salman Khan was believed to be driving during the hunt. Tabu and Neelam both use just one name.

The blackbuck is an endangered species protected under the Indian Wildlife Act.

The Bishnoi community, which protects the blackbuck deer, expressed disappointment at the acquittal of the four actors.

Chogaram Bishnoi, a member of the community, told reporters that he had seen Khan stopping his jeep and shooting the two blackbuck deer in a village near Jodhpur in October 1998. Khan and the other actors were in the area filming a movie and decided to go hunting.

In 2014, the Mumbai High Court acquitted Khan in a drunken-driving, hit-and-run case.

The judges found that prosecutors had failed to prove charges of culpable homicide, in which they accused Khan of driving while intoxicated in 2002 and running over five men sleeping on a sidewalk, killing one of them.

The government of Maharashtra state, of which Mumbai is the capital, has challenged his acquittal in the Supreme Court.