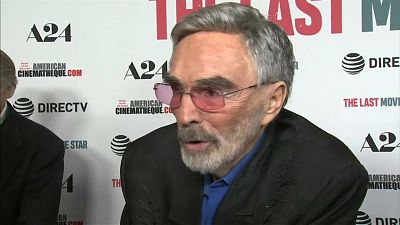 In Burt Reynold's latest film the veteran actor plays an 82-year-old former movie star whose best days are behind him.

At the film's premiere in Hollywood he contemplated as to whether or not his own career had achieved movie star status.

"I don't know. I never really got that star part but there are actors, you know. There are good ones and bad ones and ones that last and ones that don't last. I've been very, very lucky."

The Last Movie Star was directed by Adam Rifkin, a life-long Reynolds fan.

"Well, it's true, they say never meet your idols because you'll be disappointed but whoever said that never met Burt Reynolds. I grew up idolising Burt, I thought he would be the coolest guy to hang out with and I was right. He's the best, he's funny, he's charming, he's everything you want Burt Reynolds to be."

"The Last Movie Star" is ultimately a universal story about growing old.

The film is showing in U.S. cinemas this weekend and will be released in Europe soon.