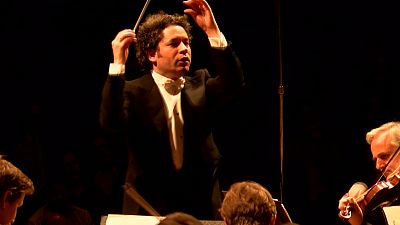 The Vienna Philharmonic Orchestra's tour across the Americas has centred around breaking boundaries and uniting cultures.

Together with the iconic maestro Gustavo Dudamel, the legendary orchestra embarked on a unique journey across the continent, from New York to Buenos Aires, with several stops including  Mexico City's majestic Palacio de Bellas Artes.

They explored the music of some of the world's most iconic composers: Brahms, Mahler, Berlioz, Ives, and Tchaikovsky.

Gustavo Dudame, known for his passionate and exuberant style, said; "I believe in one America. That is what we try to do, you know, to embrace all this continent as one with music. I'm very happy to be part of this."

The Vienna Philharmonic Orchestra has made few appearances in Mexico, with the most recent one taking place with Riccardo Muti a dozen years ago, and before that in 1981 with Carlos Kleiber.

Dudamel said; "This is a symphony full of lyrical sounds and the orchestra has that quality - that lyrical sound, that creamy beautiful way to phrase. Since the very beginning the connection with the Vienna Philharmonic was magic."

"It has been a really intense relationship. I’m very proud of that. I’m very happy to be part of that family," he said.

Dudamel, described as a 'rock-star celebrity' in Latin America, sold out Vienna's two programmes at the 1,300-seat Bellas Artes within an hour. A third concert at the 10,000-seat Auditorio Nacional was scheduled for the same time as the Academy Awards ceremony, which was of obvious interest because Mexican director Guillermo del Toro’s “The Shape of Water” was a front-runner.

In a stellar performance, the Venezuelan conductor's rendition of Tchaikovsky's Fourth Symphony was particularly memorable, with its movements between darkness and light, from agitated gloom to radiant triumph.

"Gustavo Dudamel has this outstanding passion for music and rhythm"

Daniel Froschauer, Chairman of the Vienna Philharmonic, told euronews; "The special thing about this Americas Tour is that it's the first time with Gustavo Dudamel here. It is of course something special to travel with him through Latin-America. He has this outstanding passion for music and rhythm, it's in his blood."

He continued; "It's as if Tchaikovsky had written this symphony for us. These melodies in the strings, but also in the solo wind and the brass section which partly alternate with each other."

Michael Bladerer is Managing Director of the Vienna Philharmonic. He told euronews; "I think this suits us really well. We are a very colourful orchestra. For us the sound is of great importance."

He also said; "I remember the first time when he conducted us, we were all very impressed because of his energy. Then the second time it was so wild. It was unforgettable."