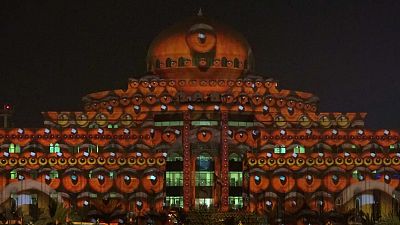 The city of Sharjah in the United Arab Emirates is aglow for its annual Light Festival. The eighth edition this year celebrates science, creativity and heritage. For 11 days, 24 international light artists beamed their talent and know-how onto various buildings across the city.

The Festival, which is spread across the cities of the emirate, is an invitation to promote inter-cultural dialogue, and tourism.

The opening ceremony, which was witnessed by a large audience was impressive and innovative. They produced beautiful light panels that used latest technology to blend light and music, and reflected the Emirate’s identity by embodying the heritage of its architectural buildings to form exquisite works of art.

The Chairman of the City’s tourism authorities, Khalid Jasim Al Midfa, told Euronews how it all came about:

“Lets see what we have and capitalize on what we have. The buildings, the architecture, the identity of Sharjah helped us so much in organising this Sarjah Light Festival. And it is a challenge because if you don’t have…unless you have a good number of these special buildings with special details it would be very difficult to host this festival.”

A piece, entitled ‘Monoliths’ by French light artist and the Artistic Director of the Light Festival, Mathieu Felix projects a hypnotic time capsule onto the Centre for Gulf Studies.

“Part one is about the creation of the universe, from macro to micro and the second part is called evolution, talking about digitalisation and all the information we are taking now and putting into the cloud. And the third part is about the future, it’s about communication with space.”

On the Courthouse Complex, a video installation from French artist Laurent Langlois and his creative studio Artslide pays tribute to Sheikh Zayed, the Founding Father of the United Arab Emirates.

Laurent Langlois told our reporter more about his creative process for the piece saying:

“In this kind of exercise you have to find (an)idea with enough graphics because we are far to see the building (well). I began to play with the eyes in the painting, animal eyes, eyes in (the) historic masks tradition and I finish the show with a small tribute to Sheikh Zayed.”

“People were shocked when they saw this for the first time because they thought it’s a painting on the wall whereas this a projection, reveals festival event manager Essam Mohammed. “Since it’s the first city in the region which is doing this type of light festival, everyone is not aware about it (the video mapping).”

This year, 1 million people are expected to attend the light festival until it wraps up on the 17th of February.

The mix of technology and Arabian architecture could be a bright move as Sharjah promotes itself as the cultural connection hub in the region.
Daleen Hassan, Euronews, Sharjah.