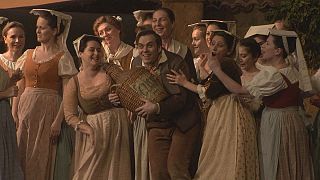 It is said that the "Elisir d'Amore" can convert the most reluctant person to opera. Composed in just one month by Gaetano Donizetti in 1832, the opera is a happy mix of unrequited love, humour and spectacular music. It was an immediate success and has been a hit ever since.

French tenor Benjamin Bernheim is making his debut in Vienna, adding a new role to his repertoire.

"Nemorino embodies youth, youth and naivety. It's about the moment before experiencing true love, before being able to understand how one behaves in society, desire, how to play hard to get," Bernheim says.

​Spurning a hand of marriage from a handsome officer, Adina eventually falls for Nemorino, who thinks a love potion, which he has bought from a charlatan, has had an effect.

"In the beginning, she is just messing Nemorino about, but as soon as she finds out that she has feelings for him, we see another face of Adina, much deeper," Naforniţă explains.

Conductor Frédéric Chaslin, the conductor of Vienna's Philharmonic orchestra says: ​"The story is very simple, very clear, intelligible, funny, with beautiful arias. It's a very good initiation into the Bel Canto of that time at least.

​"For an orchestra like the Vienna Philharmonic, it's really very easy. For the singers, of course, it is entirely different. I mean, it is one daring piece of music after the other," Chaslin adds.