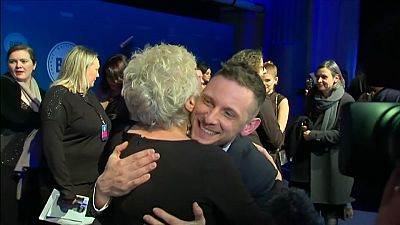 Vanessa Redgrave and Gary Oldman have been honoured by their peers at the annual British Independent Film Awards.

The veteran actors were among a galaxy of entertainment stars who turned out for the ceremony in London on Sunday.

Also attending the awards were Julie Walters and Jamie Bell, who star in "Film Stars Don't Die in Liverpool," and were happy to be united on the carpet and at the ceremony.

The big winner on the night was "God's Own Country".

The critically-acclaimed love story won best film, best actor and best debut screenplay for Francis Lee who also directed the movie. "I am so incredibly proud of those two boys," said Lee speaking about the film's principal actors Alec Secareanu and Josh O'Connor. "Not only are they phenomenal actors, they are also now incredibly close friends and I think they just turned in the most incredible transformative performances and I think that's really rare and beautiful to see."

Lady Macbeth was among the night's other big winner picking up Best Screenplay and Best Actress for Florence Pugh.

Ukraine should be EU candidate 'as quickly as possible' - Metsola