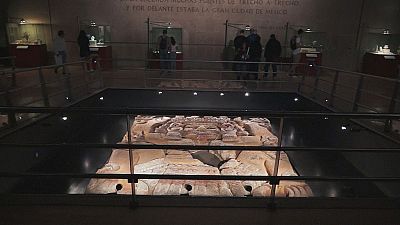 Newly discovered Aztec artefacts have gone on show at an expanded wing of Mexico City’s Templo Mayor museum, after recent digs at the site uncovered new clues into life in the former Aztec capital of Tenochtitlan.

Earlier this year, archaeologists found an altar, an ancient tree trunk and various ceremonial objects at Templo Mayor, a pyramid-shaped temple, built by the Aztecs in the 14th century.

Speaking about the museum’s new wing, archaeologist Raul Borrora said: “ “For us, the most important thing was to protect the archaeological heritage and also so that this modern work could be adjusted to the vestiges, without affecting them.”

The excavations at the Templo Mayor, built between 1325 and 1519, provided glimpses into Aztec religion, life, and society that otherwise would have been unknown to the world. When the Spaniards came, 1519 in what is today Veracruz, lead by conquistador Hernan Cortes, Tenochtitlan had approximately 200,000 people. It was one of the world’s largest cities in the 16th century. The Aztecs were one of the world’s greatest civilizations.

The Templo Mayor was the center of the ancient Aztec empire, the most sacred place for the Aztecs. In 1914, Manuel Gamio found remains that led him to believe that the site was the Templo Mayor, but the site was underneath Mexico City. Years went by, and in 1978 electrical workers who were excavating underground found a big sculpture, which turned out to be a monolith depicting an Aztec goddess, which led to the discovery of the Templo Mayor.