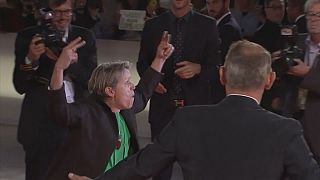 The latest stars on the red carpet at the Venice Film Festival include the main actors in Martin McDonagh’s latest film, including Woody Harrelson.

Micaela Ramazzotti and Patrick Bruel play a couple hiding a dark secret that becomes too much to cope with, eventually having to be confronted.

‘‘My only disappointment is that Michael’s not here to see it and hear it, cos I think he would love it,” he said.