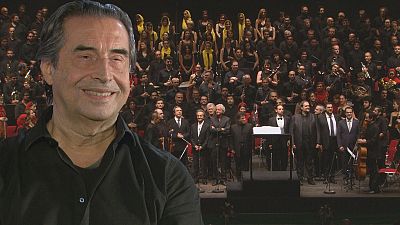 Riccardo Muti talked to Euronews about his Roads to Friendship project and told us about the obstacles he faced to bring onboard the Tehran Symphonic Orchestra.

Riccardo Muti: “We started the idea of the Roads of Friendship 20 years ago, in Sarajevo. We were all moved and touched by the tragedy there. So we wanted to bring a sign of brotherhood, of peace, of love, of friendship. And we thought that music would be the best vehicle. In a city that was still destroyed by the bombs, 9.000 people came to the concert. So the message was: when we communicate true feelings – and music is an expression of feelings – all the misunderstandings disappear, because words are always misunderstood – or can be misunderstood. Not music. From this first concert, we were encouraged to do a concert for Friendship every year.”

“I am the music director of the Chicago Symphony Orchestra, and as everybody knows the relationship between the United States and Iran is not the most beautiful relationship. And a few months ago I was in Israel and we know that between Iran and Israel, the relationship is not good at all. But I didn’t care about this, I went to Israel with great love and great admiration for the Israeli people. I went to Tehran with great admiration and love for the Iranian people.”

“The musicians of Iran haven’t played Verdi’s music for decades and decades, so Verdi – who is a universal composer – was almost an unknown entity in that country. But Iranian musicians immediately understood our message, our style of Verdi, and the two groups came together like one immediately.”