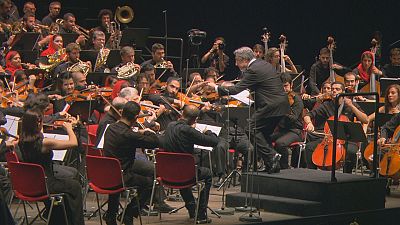 It was a historic event that conductor Riccardo Muti offered the public at the Ravenna Festival this year: marking the 20th edition of his Roads of Friendship project, he brought together on stage musicians from Italy and Iran. The Ravenna performance came just two days after another, in Tehran, on July 6th – two concerts which nearly didn’t happen: Iranian authorities only gave the go-ahead at the very last minute.

We don't get involved in the politics of the nations that we visit. We are above that. I don't want to criticize why we couldn't use a soprano that sang alone on stage. I like to see the other part - that in the orchestra women and men can sit together. It's a great step forward.

“This concert was the most adventurous because of the international political situation and also because, with the revolution, music was forbidden,” he told Euronews.

Music, the opium of the people

On July 23rd 1979, Ayatollah Ruhollah Khomeini banned all music from Iranian radio and television because, he said, it is no different from opium. Music, the 79-year old revolutionary leader argued, “stupefies persons listening to it and makes their brain inactive and frivolous”. The ban lasted a decade, with a few exceptions, including nationalist hymns meant to motivate troops during the war with Iraq (1980-1988). Music did survive underground, however.

Western classical music experienced a revival with the election of reformer Mohammed Khatami in 1997, but it suffered censorship again under president Mahmoud Ahmadinejad (2005-2013).

Today, the Islamic Republic authorises concerts under certain conditions. Women can only sing in public if their voice is covered by men’s voices. Female soloists are banned

The rebirth of a great ensemble

The project for the double concert comes less than two years after the rebirth of the Tehran Symphony Orchestra and Choir.

Founded in 1933, it is Iran’s oldest and largest symphony orchestra. In its golden age, many notable musicians like Yehudi Menuhin and Isaac Stern played with the orchestra. After the 1979 Iranian revolution, clerics outlawed all pre-revolutionary music. As a result, the orchestra faced its darkest age, playing only a few concerts in the decade following the revolution. Lack of funding led to its dissolution in 2012.

Elected for the first time in 2013, reformist president Hassan Rouhani pledged greater cultural freedom, but he faced resistance from the conservative hardliners.

“Two years ago, the Tehran Symphonic Orchestra and the chorus was re-established. After the new election, Mister Rouhani opened the doors," Riccardo Muti explained.

Honey Kazerooni is a cellist with the Tehran Symphony Orchestra. It was her first ever performance outside of Iran.

“I’m very excited to see other people from different parts of the world with different cultures, a different history, different art. It was my first experience playing in an opera. It was very different from playing a symphony, it was huge, you have to listen to the singers, you have to pay attention to everything. I will always tell everybody that I worked with Maestro Muti,” she told Euronews.

Honey Kazerooni was amused by the Italian musicians’ curiosity for Iran and classical Iranian music. “The Tehran Symphonic Orchestra has always played Western classical musical, but they have never played Iranian music. Moreover, Italian painting and architecture are famous around the world. So we know them better than they know us!,” she said.

Riccardo Muti only selected male arias, which were performed by Italian singers – a precondition for approval by Iran’s Culture Ministry. “The choice of the programme, all Verdi, was the right choice because Verdi is really universal. As the Italian poet Gabriele d’Annunzio wrote when Verdi died: Pianse d’amor per tutti (‘He cried out of love for everyone’),” he said.

“We don’t get involved in the politics of the nations that we visit,” he added. “We are above that. I don’t want to criticize why we couldn’t use a soprano that sang alone on stage. I like to see the other part, that in the orchestra women and men can sit together. It’s a great step forward.”

As for Honey Kazerooni, she is delighted to be able to work in Tehran today, where music is no longer taboo. “Nowadays it’s very natural that parents take their children to music classes. When I was a child it was very odd for me walking in the street with a big instrument. They would look at me strangely but now, no, they have got used to it.”

The 2017 edition of Roads of Friendship lived up to its reputation – showing once again how music builds bridges between people and nations, sometimes long isolated from the rest of the world in so many other ways.

Riccardo Muti on Roads to Friendship