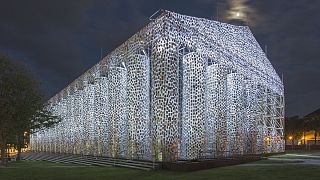 The Parthenon of Books by artist Marta Minujín is intended as symbol of resistance to any banning of writings and the persecution of their authors.
As many as 100,000 books banned in the past or present from all over the world were needed to create the work on Friedrichsplatz in Kassel, where, on May 19, 1933, some 2,000 books were burned by the Nazis during the so-called “Aktion wider den undeutschen Geist” (Campaign against the Un-German Spirit).

The symbolism is striking, as the Parthenon is the very antithesis of political repression. Indeed, the artist went on to add in a statement that the original Parthenon is “the aesthetic and political ideals of the world’s first democracy.”

The temporary exhibition is part of the Documenta 14 art festival in Kassel, Germany and will run through September 17, 2017.