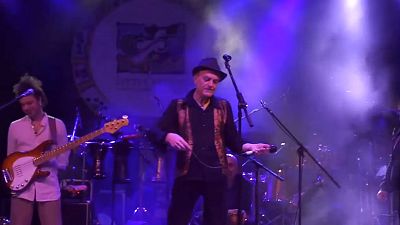 On a warm night of May in Calatabiano, a small village and former Arab fortress in eastern Sicily, the sound of an oud, a typical Middle Eastern instrument, meets the rock vibes of an electric guitar. The unusual intersection between the symbols of Oriental and Western music is brought to life through the work of Kunsertu, an ethnic rock band from Sicily, Italy, whose goal is to create a bridge between the two sides of the Mediterranean Sea.

By mixing sounds and words coming from every corner of the Middle Sea, from Italian and Arabic over the sounds of African tambours or Palestinian yarghoul, Kunsertu – a name referencing the part keeping together the launeddas, a music instrument from Sardinia – give voice to the emotions and themes concerning the people across the Sicilian Channel, narrowing the gap created by water and politics.

The band, originally from Messina, northern Sicily, began its path in the 1980s, the most challenging years for the southernmost region of Italy, which faced a rise in organized crime attacks and the first migration landings in Lampedusa.

The musicians decided to tackle these pressing issues with songs in a modern version of Sicilian-Arabic dialect, which contains words from all the civilizations that conquered the island throughout history, from Greeks to Spanish, thus creating a common sense of belonging and empathy. Their fame earned them spots at festivals and concerts around the world, from small villages in Sicily to big Italian cities like Rome, and abroad in places as far as Northern Europe and Canada, where their followers are many second-generation migrants but also curious natives attracted by their music’s message.

The group split in 1995, but after many fans requests and the events around the refugee crisis, Kunsertu finally returned on stage in 2016.

“After a long pause we felt the need to make our voices heard again through old and new songs,” Giacomo Farina, the band’s lead percussionist, explains. Songs like Mattanza, speaking about mafia, Fannan, on the need for artistic openness outside our borders, and Jazira, on migration landings in Sicily bringing a wind of beauty that should not create fear, are the songs that made this band famous for its political engagement through art.

Farina says he founded the band to give a contribution to ethnic music, and as a “citizen of the Sicilian Channel”, as he likes to define himself, he believes there is no better place than Sicily to take on this bridging role.

“Sicily is the centre of Mare Nostrum and crossroads of all Mediterranean civilizations so it can be no other place but this island, for history and geographical position, to promote a peaceful dialogue,” says Giovanni Ruffino from the Centre of Linguistics and Philology studies at the University of Palermo. “The reflection on Sicilian language should be the starting point to think about our shared roots and values to see our common past and future,” he adds.

This is also one of the reason that brought former Italian PM Matteo Renzi to choose Sicily as a G7 summit venue over the preferred Florence, because it was considered more appropriate to tackle Euro-Med issues such as the refugee crisis.

“Instead of focusing on the ugliness of politics, we wanted to exploit the beauty of music to explain current events. We decided to use popular language, like our dialect, so that these topics could be discussed by average people, even in discos or public squares, and create a music not just for the elites,” Farina concludes.

The non-commercial choice of having 10 band members is a necessary step to create the genuinity of all Mediterranean sounds and instruments without electronic devices. This is why the band has a Palestinian singer and occasionally hosts outsider musicians for exclusive partnerships.

Maurizio Mastroeni, the band’s guitarist, explains Kunsertu’s goal was also to become a platform for Mediterranean artists to learn from each other, in order to involve not only the audience but also musicians themselves so they could be more aware when conveying those messages of understanding. “We collaborated with around 90 artists, from Sub-Saharan Africa to Turkey, since we started until today,” he says,

“I think it’s a great opportunity that in this period of crises a Sicilian band acts as a human bridge in the Mediterranean. I also think music and art touch people’s souls in a more immediate way and can concretely sensibilise people better than politics,” says Mariella Laurà, a high school teacher from Messina and Kunsertu’s fan since the group’s inception.

The voice of Faisal Taher, the group’s lead Arabic voice and Palestinian refugee from Jenine, resonates above the music as the crowd swings to the sound of Kunsertu’s music in Calatabiano. “We give a cultural contribution with our ideas that are more reachable through music to average people’s hearts, but if politics don’t change it’s impossible to change current populist attitudes,” Taher says.