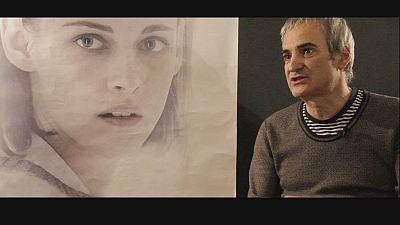 A thriller, a psychological drama, a fantasy, a mix of genres. That is how the film ‘Personal Shopper’ has been described. The star is Kristen Stewart. It is the second successive time the American was cast by the director Olivier Assayas.

Olivier Assayas wrote and directed Personal Shopper. It has been described as “wreckless and audacious” while Kristen Stewart’s performance was hailed as ““tremendous”“:https://www.theguardian.com/film/2016/may/16/personal-shopper-review-kristen-stewarts-psychic-spooker-is-a-must-have.

“I wanted to tell the story of someone who is rebuilding their life, someone who after a bereavement is rebuilding and I feel like those painters who use the colours they need here and there. So I feel like making something of a collage by which I mean all the tools I use are good all the means are good to tell what I want to tell and to make the viewer feel what I want him or her to feel,” the director told euronews.

Stewart plays Maureen a personal shopper to a demanding German super model. She is also a medium who is trying to connect with her dead brother.

“This is someone who is alone and just a person available to communicate with about someone who is not there. That is her brother’s friend who lives and works in Oman and with whom she communicates through Skype. She does research on the internet that becomes an extension of our own memory or knowledge,” explained Olivier Assayas.

Much of the success of the film is down to Kristen Stewart’s performance.

“She inspires the film, and then I can tell it in a different way, but the reality is that she inspired this character,
I think she also gave me the ability to do it, that is, I think I would not have ventured into a project, a story, that has to do with the fantastic, with the invisible, where there are somewhat abstract things that I had to handle.

‘And that, I would not have done it if I did not know that I had an actress who brings everything back to reality, someone incredibly realistic, physical, materialistic,” concluded the director.

At Cannes, Assayas shared the Best Director Award with Cristian Mungiu for his film Graduation.

These are the release date for your country