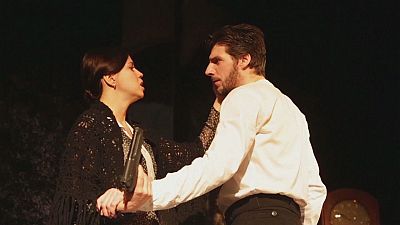 A man or a murdering monster? Who was Joseph Stalin? A stage play called “Stalin.Watchmaker” is set to open later this month in the Rostov Academic Theatre in Russia which will examine the complex character of the former Soviet leader.

“Stalin. Watchmaker” sees Joseph Stalin played by Vyacheslav Ogir recalling the most important moments of his life, from his childhood, to his relationship with his wife and children as well as the many decisions he made as leader of Soviet Union that ultimately led to the destruction of millions of lives in the gulag labour camps and during the Great Purge.

The director, Alexander Pudin says he wants the play to help Russia reconcile Stalin’s role in history and prompt discussion about current policies in the country.

“Not all is good with civil justice in the country. And this is the signal that we have to think about and talk about. A man, a leader is needed who will unite the nation, who will reconcile with liberals, democrats and patriots. One leader for all, honoured by leftist or those on the right.

‘This theme of the play is very timely now and it is very important to find out what is going on in the country and where we need to head next,” opined the director.

So what can audiences expect? That could depend in what frame of mind and with what prejudices people approach the performance.

The actor who will take on the lead part of Joseph Stalin believes the leader’s character was complex and he hopes the audiences will see both good and bad in the former Soviet dictator.

“He is very diverse and those who want to see only bad in him will find only bad and this attributes the character of our play too. Those who come here with good feelings will find positive moments. Our mission is not to acquit or blame Stalin. Our aim is to explain certain things,” explained Vyacheslav Ogir.

“Stalin. Watchmaker” opens at the Rostov Academic Theatre in Rostov at the end of this month.