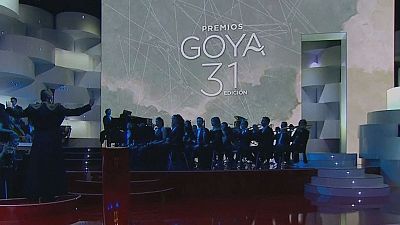 The best in Spanish and Latin American-filmmaking turned out for the 31st Goya awards in Madrid.

Penelope Cruz stunned in a Versace dress at the ceremony, which is considered Spain’s equivalent of the Oscar’s.

Penelope Cruz looked stunning in a custom made #AtelierVersace gown in occasion of the 2017 edition of the Goya Awards. #VersaceCelebritiespic.twitter.com/Y2ylk4WWmR

‘The Fury of a Patient Man’ was the big winner of the night, taking home best picture as as well as Best Original Screenplay.

The thriller follows a convicted robber who struggles to escape his dark past after being released from prison.

The story of love and revenge is the debut effort from actor-turned-director Raul Arevalo, who earned himself the award for Best New Director.

THEFURY OF A PATIENMAN wins Best Film at #Goya2017! Congratulations to Raúl Arévalo and to all the winners! #Spanishfilmspic.twitter.com/sNrkHCKcs2

The film faced tough competition from A Monster Calls, which scooped no less than nine awards including best director gong for Juan Antonio Bayona.

The fantasy drama tells the story of young boy whose nightmares become very real as he faces the impending death of his single mother.

The film explores the broken relationship between a mother and daughter and their efforts to repair it after years of separation.