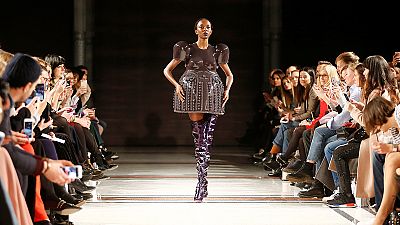 It was time to show off in Berlin as the city celebrated its fashion week. It is an inspirational time, a platform for the creative with the focus on the young.

Austrian designer Lena Hoschek went back to the 80’s and 90’s with her new collection which she called ‘Dolls House’.

“The inspiration did not only come from my own childhood and dolls but also from sexy girls, showgirls, Hollywood, America, from the good times,” she explained.

Colour, crazy and loud – that’s what the Graz-based designer was aiming for. And the core inspiration was an old t-shirt which her mum used to wear back in the 80’s.

It was turquoise, light blue, pinkish – typical candy colours, and very much of the time, loosely cut with Mickey Mouse on it. A souvenir of the 80’s.

Many of the wide-swinging dresses and skirts made from cotton, jersey and lamé, with names such as “Confetti Dress” or “Candy Dress”, also exuded charm with polka dots, little hearts and specially made lipstick prints.

The 35-year-old said that for her the ’80s and the ’90s with the grunge music were strongly connected to girl power. She was, she said a loud girl, into punk and grunge in a big way in her teenage years.

And that’s really what her new collection is all about.

Berlin’s Imperial Telegraph Office was the location for German label Marc Cain. Among the stars was American actress and model Kate Bosworth, who made her name in the Robert Redford directed movie the ‘Horse Whisperer’.

Alexandra Maria Lara best known for her role in ‘Downfall’ which tells of final days of Hitler joined the celebrities as well.

“The Autumn/Winter Collection will be sporty mixed with couture. We have a lot of wonderful materials. Satin, lurex, tulle, chiffon,” explained the label creative director Karin Veit.

The theme for the show was ‘Ballet Magnifique’ with sophisticated textiles and feminine forms. There were skirts with blazers and dresses signaling the return of knitted. The Marc Cain company specializes in knitted material which is 100% made in Germany

There were strong colours with bold reds and oranges with mixed prints blossoms, leopard print, all colourfully mixed together.

Marc Cain is an international company which was founded in 1973 and is based in a small community in the South West of Germany. The company has almost 1000 employs in Germany alone and it sells their clothes in 58 countries.

Fashion designer Dorothee Schumacher is also one of Germany’s most successful labels with shops in around 45 countries.

The Düsseldorf-born designer’s creations are suited perfectly to the Berlin scene with its mix of patterns and emphasis on the feminine and the wearable.

“It’s the first time I have worked with the colour black, I used to say I would never do that because I thought it might look too much fetishist. But now I don’t just want to please people I also want to surprise. I hope there will be some Ahhhhhhh’s in the audience,” she said.

There were surprises – daring and a lot of leather, exaggerated silhouettes, strong and provocative colours.

Marina Hoermanseder is one of Berlins emerging fashion designer. She was born to a French mother and an Austrian father and studied at London’s Central Saint Martins College of Art and at the ESMOD fashion school in Berlin.

Her extravagant and fancy clothes have had the seal of approval from international stars like Lady Gaga, Rihanna and British electro musician, dancer and model FKA Twigs. All have worn her clothes on video shoots.