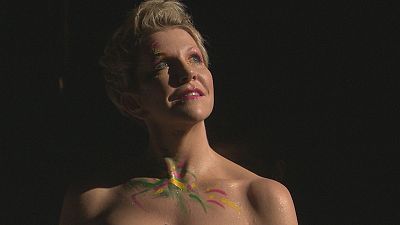 Light, hope, joy: thus, on the notes of Nicolò Jommelli, an 18th century Neapolitan composer, ends the extraordinary musical trip Joyce DiDonato invites us to embark on: from the horrors of war to the comfort of peace – one of the many gifts music can offer.

Music has a power much, much greater than modern technology...

Thanks to Musiikkitalo – The Helsinki Music Centre, Musica was able to meet the top American mezzo-soprano.

In the words of Joyce DiDonato:

“We are using these majestic composers from centuries ago to look at both sides of humanity that we all have inside of ourselves: the dark and the light, the turmoil and the serenity. We start with “Scenes of horror, scenes of woe”, it’s this premonition of seeing destruction.”

And so it begins … hope to see you all in one of these upcoming cities!! #TalkPeace / #DoPeacepic.twitter.com/ltjNMzY6MR

“… and the idea is just to sort of plunge people into chaos, and to feel it.”

“… and then being held a captive, and being a part of the darkness but still yearning for the light; and then the light comes and yet the darkness is sort of calling in the background… We’re always going between these two worlds.”

“I wanted to shake up the listeners, so that they are forced to confront why they are uncomfortable, or why they are excited. So I’m using fashion. I’m applying face paint that is illuminating this world of scars, and blood, and wounds; the scars are still there in the peace time but it’s transformed more into light and water and flower.”

My friends, it is International Peace Day – here is my contribution: https://t.co/ZzL1M5zR5L#TalkPeace / #DoPeacepic.twitter.com/LIyA0ddd9b

Music featured in this edition of Musica:

Joyce DiDonato’s next concerts will take place on the following dates: December 9 (Chicago, IL), 12 (Rochester, NY), 15 (New York, NY); several dates are scheduled for May and June 2017 in Europe.