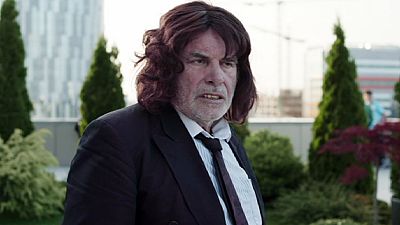 “Toni Erdmann” was praised as one of the favourites at this year’s Cannes Film Festival, but it never won any prizes. Now, as the film hits the German silver screen it is already being hailed as the best film of the year. One Critic said “The remarkable thing about Toni Erdmann is the way Ade handles tense family interactions.”

The harder they push, the closer they become. In all the madness, Ines begins to realise that her eccentric father may deserve a place in her life after all...

Austrian actor Peter Simonischek plays Winifried, a divorced German schoolteacher with a fondness for wacky humour. He hatches a bizarre plot to loosen up his highly-strung daughter, Ines (Sandra Hüller), surprising her with an unwelcome visit.

The power of alter egos

Director, writer and producer did a lot of research on comedians with alter egos such as Andy Kaufman but was also inspired by personal experiences. She revealed:

“The radicalism with which (US comedian) Andy Kaufman lived and embodied his roles was one thing that inspired me a lot. The other thing was my own family, in which there is a lot of joking around. My father also has , I think, quite a good sense humor. Once I gave him some gag gifts, false teeth, which he used over the years now and again.”

The film has some priceless moments, as funny as they are moving. Ade masterfully builds an arc over the film’s long running time before returning to a gently-melancholic minor key.

Her actors were exposed to a number of unpredictable, awkward situations. Sandra Hüller told reporters:

“Ha – nobody would have known what the shooting would be like, none of us really knew. What we all knew was the schedule and the content. We knew each other as colleagues, we did rehearse a lot, and yet, nobody knew (what would happen). It’s just like having a child.”

Although they feel very spontaneous, the ‘wacky’ scenes were not improvised. Everything was precisely written and meticulously planned, from the characters themselves to their wigs and false teeth.

A review of TONIERDMANN and not one mention of petit fours. You're all in for a treat ★★★★ https://t.co/qjn4pLQSgBpic.twitter.com/g2hg9DjFYz

“Working with her is pushing everybody to their utmost limit. That’s the way it is. I talked with the guy who made the subtitles in Cannes and he was thrilled by her.

But he also said (takes a French accent): ‘I ‘ve never worked so much in my life!’(hahaha!) Anyone who gets in her way must be prepared to make a really big effort.”

“Toni Erdmann” is a comedic tragedy, in which a father forges his way into his daughters life via his alter ego. The harder they push, the closer they become. In all the madness, Ines begins to realise that her eccentric father may deserve a place in her life after all…..

Toni Erdman will be in UK cinemas in February 2017.