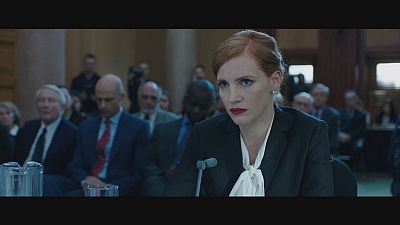 Jessica Chastain has carved herself out a nice niche in hard-nosed determined women characters, so playing a Washington lobbyist you would give her opponents little chance of staring her down.

Except in political thriller “Miss Sloane” she tries to force gun control on the firearms industry. How high a price is she prepared to pay to win?

“What interests me the most is creating a conversation and a discussion and saying – did you know that this is how DC works? Did you know there was this much fundraising? Do you know that our congressmen and senators are beholden to the people who pay for their re-election? Discuss! That’s what I’m more interested in than just saying ‘This is wrong. We need to change it. Let’s do it tomorrow.’ Because like I said, we are actors. This is entertainment. And I wouldn’t even begin to want to tell people how to live their lives,” says Chastain.

Now 39 she found the role’s gender politics more interesting than the actual storyline. And she felt there had been much unfair criticism of Hillary Clinton during the US election.

“But also for me, what is more timely is the gender politics of it. Hillary Clinton, in the first debate, gets criticized for being overprepared. I have never heard a man be criticized for that. And Elizabeth Sloane is a woman who is overprepared, one step ahead, ambitious, a perfectionist, but very flawed. And I think it’s great that we have a female character that exhibits that in a film,” she says.

Directed by John Madden, “Miss Sloane” is already winning Oscar points for Chastain. It is released this week in the US, and in Europe in the New Year.