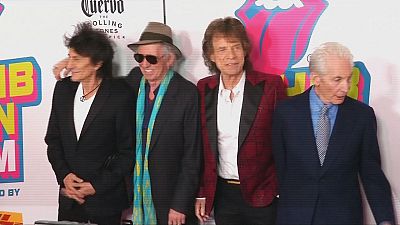 After London, the Rolling Stones are bringing their travelling exhibition, ‘Exhibitionism’, to New York.

In a way there's a sense of nostalgia, but I think I walked away from it thinking how much the Stones mean to so many people. And that was kind of humbling in a way.

Featuring 500 items of rare memorabilia, it’s an immersive journey from the very beginnings of the iconic rock band to the heights of superstardom.

“In a way there’s a sense of nostalgia, but I think I walked away from it thinking how much the Stones mean to so many people. And that was kind of humbling in a way,” said Keith Richards.

The show’s curator wanted to explore the band’s influence on fashion, film, music videos, recording, and art and design.

The majority of items were obtained from the Rolling Stones’ private archives. The centrepiece of the exhibit is a full-sized replica of the London apartment that Mick Jagger, Keith Richards and Brian Jones shared in the early Sixties, recreated entirely from memory with the help of talented artists and scenic designers.

As the band hardly kept anything from their early days, the show’s curator called upon collectors from across the globe to loan out their prized memorabilia.

History is still in the making as the Stones prepare to launch their latest album ‘Blue and Lonesome’ in December.

Asked how they have kept going for so long, Keith Richards had the answer: “Good living, clean health, plenty of exercise and a cold shower every morning. Believe that you’ll believe anything,” he laughed.

‘Exhibitionism’, and immersive exhibition examining half a century in the life and career of the Rolling Stones, runs at the Saatchi Gallery in New York until March before heading to Chicago.