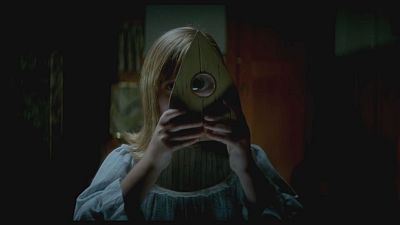 Halloween time and with it come movies that go bump in the night.

‘Boo! a Madea Halloween’ features Tyler Perry in three roles as well a being the writer and director.

Madea is a sassy elderly woman caught in a paranormal adventure.

The character is based on the traditional idea of a grandmother according to Tyler: “I just think that people miss this kind of grandmother. She was around all the time in days gone by, and she’s not around anymore.”

The film is raking it in in the US and is out in Europe over the weekend.

‘Ouija: Origin of Evil’ is a seance scam movie until an authentic evil spirit enters and takes possession of one of the younger female scammers.

It’s coming for all of us. See the film critics are calling “terrifying.” Ouija: Origin of Evil is now playing. https://t.co/7ZwhKSL57Jpic.twitter.com/LBQ9CKNpeI

Director Scott Derrickson is keeping both feet firmly on the ground:
“Yeah, it’s wonderful. I try not to think about that when I’m making the movie and now that they’re coming out I’m still trying not to think about them but it is relieving. I do feel relieved that people are responding to it the way that they are. It’s great.”

The film stars Benedict Cumberbatch as neurosurgeon Doctor Stephen Strange, who after a car smash, becomes a link between the here and the hereafter guided by Tilda Swinton’s the ancient one.