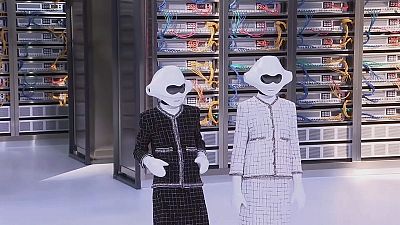 With its lineup of models whose sweaters read ‘Rykiel Forever’, the Sonia Rykiel show at Paris Fashion Week paid tribute to the legendary Parisian designer who died in August at the age of 86.

What I want to do is (...) do better as a company but also encourage other businesses that they can have growth in their performance and at the same time they can actually have a better environmental impact

Actress Salma Hayek and billionaire husband François-Henri Pinault made a stylish appearance at the Stella McCartney show. The British designer unveiled her upcoming Spring/Summer collection at the Opera Garnier.

Known for her pioneering anti-fur, anti-leather stance, McCartney presented a 100% vegetarian collection. Even the shoes were environmentally-friendly. The company’s focus on sustainability reflects a nascent change across the industry, with a new generation of consumers expecting their clothes to reflect their values.

And in an unusual move, models ditched the serious strutting look in favour of a joyful dance for the finale.

After the show, McCartney talked about her company’s business model: “We basically have reduced our environmental footprint by 35 percent and at the same time we’ve grown as a business, so it’s extraordinary. And I think really what I want to do by that is to do better as a company but also encourage other businesses that they can have growth in their performance and at the same time they can actually have a better environmental impact,” she said.

The collection itself included much that has become familiar to Chanel-lovers but with a playful twist. Sideways baseball caps in a whole host of colours were ubiquitous with classic Chanel tweeds given an urban edge in the form of hoods.