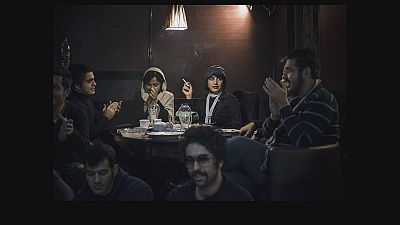 Jérémy Suyker is a young French photographer.One can find examples of his work in National Geographic and Time. His latest collection of work focuses on Tehran:“My job is to present a different perspective of a country, situation, a problem. So Tehran is this mega city of 14 million inhabitants and lots of things are going on. It is a city that is full of possibilities. In Iran people say that ‘everything is forbidden,’ but everything is possible.
They say in Farsi the daroni biruni that’s the outside and the inside or the public and the private, that is something that strikes one about life in Iran. We become aware that there is not one way to function in this reality. There is always the contrast with what one can do outdoors, with all the limitations, and what is truly inside relations between relatives, with the family at home.’‘

He spent months in the Iranian capital to photo the ‘Insolents of Tehran.’ The title of his work: “These insolents are the young people who play with what is forbidden. They keep pushing censorship to try to find the balance of what is legal or illegal. They don’t go into hiding, they keep a small window on the world open and watch what goes on in public.In a cave about a two hour drive from Tehran and, contary to what you might think, this is all legal, a theatre company is granted permission to perform in a natural setting. At the entrance to the cave is a Christ like figure, you have to imagine that the people there are drawn to the performer at the back of the cave. It is quite discreet, you have to be aware of it.”

The work may yet be published in book form, but by then he may have returned to Tehran:“We become aware that religion is not always present, at least not everywhere. We realise that Iran has an ancient culture, not just Islamic. It is easy to fall in love with Iran and fall in love in Iran.’‘