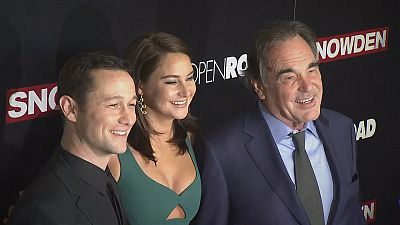 Oscar-winning director Oliver Stone has been premiering his latest movie ‘Snowden’ in New York City. The film chronicles a decade in the life of whistleblower Edward Snowden, who became a global household name in 2013 after leaking classified security documents to the press.

He (Snowden) helped us with the film enormously but he didn't have any control. We did what we had to do, what we wanted to do. We checked the story with other people. We talked to as many people who would talk to us. We heard the NSA accounts.

Stone, who met Snowden several times, said it wasn’t an easy task convincing him to make a movie about him: “He helped us with the film enormously but he didn’t have any control. We did what we had to do, what we wanted to do. We checked the story with other people. We talked to as many people who would talk to us. We heard the NSA accounts. You know, not that many people have talked about the NSA, so this is really hard-earned research and I think it’s very valid,” said Stone.

Joseph Gordon-Levitt plays the lead role. Asked whether he hesitated about taking it on, he said: “There were certainly voices in my professional life, people who said ‘Look, this guy is a polarising figure and half the country feels positively about him but half the country feels negatively about him and that could be detrimental to your, you know, commercial career.’ I mean, it’s not that they’re wrong, I just didn’t want to make my decision based on that.”

Snowden’s disclosures revealed global surveillance programmes, many run by the NSA and the Five Eyes Intelligence Alliance with the cooperation of telecommunication companies and European governments, and fueled debates around the world about mass surveillance, government secrecy and the balance between national security and information privacy.
Wanted in the US for violating the Espionage Act, he faces at least 30 years in jail if convicted there. He currently lives in an undisclosed location in Russia.

Backed by human rights leaders and a number of prominent public figures, Edward Snowden has asked for president Obama to grant him a pardon before leaving office in January.

The film has premiered to mixed reviews, with critics accusing Stone of lacking nuance in his latest biopic.

‘Snowden’ is on global release now.