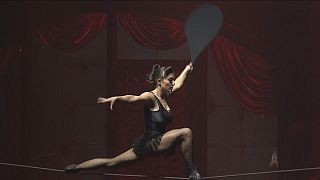 The company wanted a youthful, cabaret-style performance. I said OK, but let's look at it through the eyes of Brassai, as he offered a peep at what was going on behind the scenes.So this show offers glamour but also a darker side.

Jazz musicians, singers, dancers and circus artists bring alive the exciting and decadent world of Montmartre, where Picasso, Henry Miller, Modigliani and Josephine Baker would sink into the shadows of the night.

The director explains how he was inspired by the black-and-white pictures of Hungarian-born photographer, Brassai, who lived in the French capital and often wondered its streets late at night with his camera.

“The company wanted a youthful, cabaret-style performance. I said OK, but let’s look at it through the eyes of Brassai, as he offered a peep at what was going on behind the scenes,” says the show’s creator, Bence Vági. “So this show offers glamour but also a darker, ‘behind the scenes’ side. We wanted to portray the world of cabarets as it was in Paris, Berlin or Budapest at the time, so you see the sadder side, too. “

The director says it was important to get close to the audience. The show blurs the boundaries between stage and audience, with part of the public sitting on stage as performers flip and twist above and around them. Live music also plays an important role for that authentic ‘cabaret’ atmosphere.

“It was quite a creative process,” says artist Zsanett Veress. “The show’s creator, Bence, came up with this idea, but he gave us free rein. He gave us pictures and we chose our own characters and movements. We worked on it together.”

On the subject of humour, troupe member Aron Pinter says it’s a very specific medium: “It depends a lot on the public… on their mood, on the day or the night, the weather, the general situation in the country. All these have an impact on each other.”

Besides its performances in Hungary, Recirquel is taking ‘Paris de Nuit’ and other shows on a world tour that includes gigs in Santiago de Chile, San Sebastian and Montreal over the coming months.