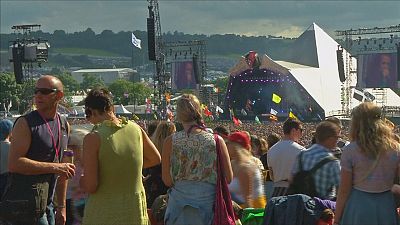 It wasn’t the rain or the mud that crashed the party at this year’s Glastonbury Festival – it was Britain’s vote to leave the EU.

A survey of more than 1,000 of those gathered at the iconic music festival in Somerset, England, showed 83 percent voted against a Brexit. And while the lineup of performers certainly helped, some attendees struggled to shake off the shock after the vote.

Some performers, including Damon Albarn and Foals frontman Yannis Philippakis, shared their sadness from the stage.

“My heart is broken,” Albarn told the crowd gathered at the Pyramid Stage to watch him play alongside the Orchestra of Syrian Musicians, a group of musicians who fled the Syrian civil war whom he has brought together from around the world. “Democracy has failed us.”

'Glastonbury stands for everything our generation wants' – the bands railing against Brexit https://t.co/RaxatcOMuHpic.twitter.com/fnAdOOpRFs

Labour leader Jeremy Corbyn, who had campaigned for Britain to stay in the EU, had been scheduled to talk at the festival on Sunday, but he pulled out.

Jeremy Corbyn 'pulls out of Glastonbury to focus on Brexit and EU referendum issues' https://t.co/NyqqI5gVBD