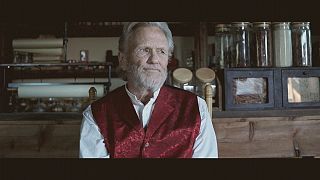 Iconic country musician and actor Kris Kristofferson, who turned 80 this June, is back on the big screen as a barkeeper in Traded, a Western set in the 1800s.

I've been riding horses since I was a little boy, and I liked the script...

Kris Kristofferson, actor/musician: “I’ve been performing, both in films and you know, singing, from the start, for some reason they both started I guess about 1970.”

Writer of Janis Joplin’s “Me and Bobby McGee”, Kristofferson is the recipient of numerous Grammy Awards, including a Lifetime Achievement Award in 2014.

Kris Kristofferson: “I always liked working in Westerns because I’ve been riding horses since I was a little boy, and I liked the script and I’m glad I came on it, because it was fun.”

Also featured in the movie is country singer Trace Adkins, who started out performing in honky tonk bars in the Southern US.

Set in Kansas, we follow a rancher, played by Michael Paré, who has to save his daughter from an old enemy, putting his reputation as the fastest draw in the West to the test.

The movie has been released in the US and will soon be available on-demand and on Digital HD.