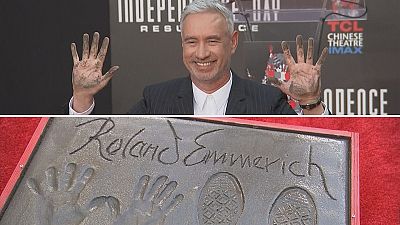 German director Roland Emmerich, known for his films “Independence Day” and “The Patriot,” was honored with a hand and footprint ceremony at the TLC Chinese Theatre on Hollywood Boulevard on Monday (June 20).

The 60 year-old remembered first coming there in the 1980’s as a film student: “There were all these hands and feet of all these screen legends. And I just cannot believe that I’m one of them now,” he said.

The ceremony came just ahead of the red carpet premiere of “Independence Day: Resurgence” – Emmerich’s sequel to the 1996 sci-fi blockbuster.

Twenty years later, the plot sounds very familiar: Aliens come to destroy planet Earth. The U.S. president is a woman and humans have designed a new defense system, but that’s still not enough to protect mankind.

Some reviews have been harsh, with the Guardian’s Peter Bradshaw calling it “planet-smashingly boring.”

The first “Independence Day: Resurgence” reviews are in from overseas … and they are harshhhhh https://t.co/ak5zi0vViN

“I wouldn’t even read the script, I would just say yes if he called me again,” she said. “Because he’s so talented as a director, and it’s rare as an actor to go, ‘whatever you want’ I know I’m in good hands.”

Will Smith’s character killed off

Will Smith, however, was not on board for the sequel. His character, hero Steven Hiller in the original movie, was killed off and his grown son is played by 24 year-old Jessie Usher – who met Smith recently.

“I spoke to him at the correspondence dinner a the White House,” Usher said. “It was the first time I ever met him and he has been my career idol forever. He was so nice and so awesome. He was like, ‘Congratulations man, I can’t believe this is happening for you. It was amazing.”

The original “Independence Day” was a huge international success and reaped more than $800 million. Emmerich thought it would be a stand-alone film. But over the years, everybody kept asking him about a sequel. And new technology made things easier.

“I realized just how much more incredible film technology is, that we now shoot with digital cameras, blue-screen shots are not a problem at all anymore,” Emmerich said. “And then you do everything in the computer. No more models. No more frustration with things. And that’s like when I said, ‘Maybe I should do one.’”

Steven Spielberg told Roland Emmerich #IndependenceDay would be “one of the most imitated movies” for next 30 years https://t.co/mdxhOdA4ig