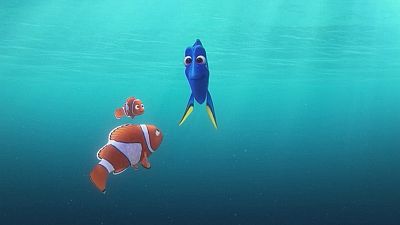 It’s the sequel a whole generation, and their parents, have been waiting for: ‘Finding Dory’ is about to hit theatres around the world, thirteen years after the planetary success of Pixar’s Oscar-winning ‘Finding Nemo’.

I love that each of these characters is flawed and they're all going through a little bit of a struggle and they use their disability to actually be the strength.

The film follows Dory, the blue tang fish, who suffers from short term memory loss, on her journey to be reunited with her family. Many of the original characters are back, as is Ellen DeGeneres, who voices Dory.

“I think it (the sequel) is both darker and lighter,” says DeGeneres. “I’ve said (that) to many people because it’s more complex and layered and there’s more messaging in it. (…) I love that each of these characters is flawed and they’re all going through a little bit of a struggle and they use their disability to actually be the strength.”

DeGeneres campaigned hard for this sequel. She says Dory’s character is very appealing, and sends out a positive message about self-acceptance, perseverance and optimism.

“I think I, like Dory… I feel different. I feel like probably I don’t think the way everybody thinks. And also, I’m as childlike as Dory is and I’m as, hopefully, optimistic as Dory is,” says the popular TV host and comedian.

Pixar’s corporate parent Disney hopes the film will add to its other 2016 hits ‘Captain America: Civil War’, ‘Zootopia’ and ‘The Jungle Book’, three of the year’s highest-grossing films.

‘Finding Dory’ hits theatres around the world this summer.