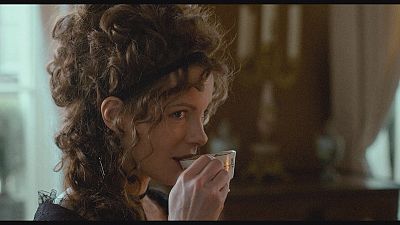 She's sort of comfortable in her own charm and her own abilities and her own power and aims for things that she wants and makes sure that she gets them...

Lady Susan Vernon decides to find a husband for both herself and her daughter and embarks on a controversial relationship with a married man. Seduction, deception, broken hearts and gossip ensue.

Actress Kate Beckinsale on Lady Susan: “She’s sort of comfortable in her own charm and her own abilities and her own power and aims for things that she wants and makes sure that she gets them and there’s something so impressive about that. Despite the fact that she’s a bit ruthless, nobody is really terribly hurt by her. You know, by the end of the movie, it’s just that she’s single-minded about her own stuff and it’s funny.”

Set in the 1790s, the film features lavish costumes of the era – something that Beckinsale was surprised that the crew managed on such a modest budget.

Kate Beckinsale, actress: “I knew the budget of this movie was very, very small and I thought, ‘I wonder what the costumes will be like?’. I thought they’d all be rented and in fact he (director Whit Stillman) had the most wonderful costume designer, Eimer (Ní Mhaoldomhnaigh) who made, I think, all of Chloe and my clothes were made completely from scratch; shoes, everything, the lot. So I don’t know what favours she must have called in, but it was such a treat coming in every day and seeing this kind of Christmas present of a costume that you’ve not seen before that’s just been made for you. It’s perfect.”

Called breathlessly funny, “Love & Friendship” opens in North America late-May and across Europe from mid-June, where it will debut in France at the Champs-Élysées Film Festival.

The film was directed by American writer Whit Stillman.