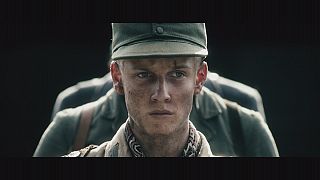 ‘Land of Mine’ is a Danish-German film, which opens up a rather unknown chapter of World War Two.

I always felt that of course the Germans should clean the mines themselves, but did it have to be kids?

Directed by Denmark’s Martin Zandvliet, it is a story from the days following the surrender of Nazi Germany in May 1945.

German prisoners of war in Denmark are sent to remove landmines along the coast – most of them very young boys. Nearly half are killed or badly wounded.

The film involves love and hate, revenge and reconciliation.

“I came up with the idea of making a movie about the dark side of Denmark’s war history. Normally we always hear about how good we were, how helping we were. But I believe that all nations have a dark side. So that’s when I started researching,” said Zandvliet.

Crawling in the sand, the boys are forced to find and remove mines with their bare hands.

“When I first found out that the Germans were forced out on to the beach to clear the mines, I became much more interested in the story of course, which I thought was horrible that boys were forced out there,” explained Zandvliet.

“I always felt that of course the Germans should clean the mines themselves, but did it have to be kids?”

There was little in the way of documents about this part of history, so the director took on a lot of research himself – in cemeteries, through hospital records and talking to historians and seeing their archives.

“There isn’t one single history book written about it. So I felt that it was a topic that nobody really wanted to touch,” said Zandvliet.

“But hopefully now there will be some debate and maybe a history book will be written about it.”

‘Land of Mine’ started showing in German cinemas earlier this month.