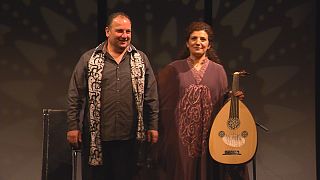 Syria was at the heart of a recent series of concerts at the Opera in the French city of Lyon under the theme The Syria I love.

I hope Syria will remain united and will not be divided.

Among the artists invited were Syrian singer, ud player and composer Waed Bouhassoun and Moslem Rahal, regarded as one of the most outstanding Ney flute players in the world. Euronews’ Randa Abou Chacra went along to meet them.

“What we want to show is the diversity of cultures and civilisations in Syria – from North, to South,” said Waed Bouhassoun.

“Our concert features an array of musical styles from across Syria, which we have brought together,” added Moslem Rahal. “I hope Syria will remain united and will not be divided.”

The pair chose to perform songs from the Jabal el-Arab region of southern Syria. Moslem Rahal’s chosen instrument is the“Ney”:http://www.mideastweb.org/culture/ney.htm – an end-blown flute that figures prominently in Middle Eastern music.

“For me, the Ney helps get the best out of the human voice,” Waed explained. “The voice is enhanced by the instrument. In the end, my voice and the Ney become one.”

“We wanted to recreate the atmosphere of the poet playing on his the Rababa," said Moslem. “Here, the Ney replaces the Rababa. The music becomes one with Waed’s voice.”

Moslem not only plays the Ney, but also makes the instrument. His ambition is to change the way people see the Ney by taking part in jazz, rock and classical music concerts around the world.

“People think the Ney is the same as the ancient bowed string instrument, the Rababa,” he says. “They see it as a weak instrument, which doesn’t evolve and doesn’t work in harmony with other instruments. That’s not the case.”

Both musicians have what could be described as a true love story with their instruments.

“I am currently writing a concerto for the Ney as part of a philarmonic orchestra, so what I do is I add scales or maquames, which don’t exist in Western music,” Moslem told Euronews.

Waed is a composer and researcher. She holds a doctorate in ethnomusicology and specialises in wedding and lamentation rituals from Syria’s southern Jabal al Arab region.

“Thanks to my studies I have acquired another vision of music,” she explained. “Not just the vision of a musician, a composer and a singer, but also the ability to understand and accept other people’s music. This has allowed me to work with other musicians without judging their music.”

After recording their first CD together, Waed and Moslem are both dreaming of peace in Syria, so that one day it will be their turn to welcome artists from around the world for concerts in their own country.