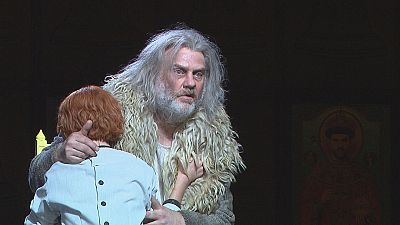 For the first time London’s Royal Opera House is currently showing the rarely-seen original version from 1869. It’s also a debut in the lead role for the famous Welsh bass-baritone Bryn Terfel.

“It’s incredibly important that one choses the right roles at the right time in ones career. Now I’m 50 years old, I feel I can change another gear to different kinds of roles,” Terfel told euronews.

Terfel takes on one of the greatest operatic bass-baritone roles of all times – the haunted tsar Boris Godunov. He spent almost a year preparing for the challenging role.

“German, Italian, French you can correct yourself, Russian it’s a totally different animal. It’s a new language for me. At Covent Garden we also have many Russians in the orchestra. So I have been looking at the leader of the second violins and the second desk of the violas and they are winking and they are showing their approval,” added Terfel.

“Undoubtedly, you cannot hide the fact, that it is incredibly in nature Russian, some deep instruments, these low beautiful melodies and he wrote specifically to the lower voices,” said Terfel.

“Funnily enough you hear two notes of this opera and you know it’s a Russian opera. It has that distinct colour, the colour of the double basses and the bassoons, the cellos. Mussorgsky has created a world that is really about his country,” said Pappano.

This evening is the live cinema relay of #ROHBorisRoyalOperaHouse</a> looking forward to hearing from people watching! <a href="https://t.co/vQ6x4X3gv1">pic.twitter.com/vQ6x4X3gv1</a></p>&mdash; ROH Chorus (ROHchorus) 21. März 2016

The opera was inspired by the 16th century tsar Boris Godunov who came to power by supposedly murdering the true heir which for Pappano adds to the drama: “The story itself comes from Pushkin who dressed up history a little bit. We don’t really know if Boris had the young Dmitry assassinated. We don’t really know that for a fact but it makes for great theatre and to see somebody tortured, psychologically by the weight of this guilt is in theatre something very, very interesting.”

Sentiments shared by Terfel: “It’s a psychological, nuanced characterization, especially when you get towards the death scene. This dark side, this inner turmoil is always in him. So this is the rise and fall of Boris Godunov.”