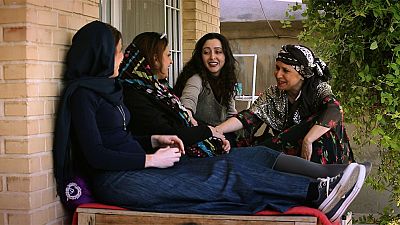 This week in Cinema Box, ‘No Land’s Song’ is a gripping and heartrending documentary about a woman’s cultural crusade to give their voices back to women on stage in Iran.

Filmmaker Ayat Najafi follows his sister’s relentless quest over nearly three years to try and organise a public concert in Tehran featuring female solo singers. Since the Islamic Revolution, it has been forbidden for women to sing in front of men in public. As she continually faces rejection from the authorities, Sara, herself a composer, decides to turn the concert into a cross-cultural event and invites singers and musicians from France to perform traditional Persian songs.

Featuring Sara’s secret audio recordings of her meetings with officials and archive material of legendary Iranian female singers, the film takes a bold political stand which illustrates the absurdity of the legislation.

Music is, of course, a centerpiece of the documentary, channelling powerful emotions, the sadness of dying voices and the musicians’ passion for their art, which transcends cultures.

An ode to the triumph of art over ignorance, I hope you enjoy ‘No Land’s Song’ as much as I did. Have a good week.