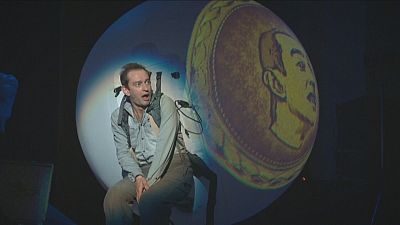 The Russian Black Sea resort of Sochi, famous for hosting the Winter Olympic Games in 2014 is also the host city for the annual Winter International Arts Festival.

For its ninth edition, the organisers have prepared an outstanding program aimed to surprise the audience with a constellation of theatrical, ballet and music stars,

There is also a world premiere of Don’t Leave Your Planet – a musical based on the book, The Little Prince, by Antoine de Saint-Exupéry.

Viktor Kramer, the Stage Director says: “Everybody can say they know what this book is about, and every child and every adult is familiar with that.

“But we found out that there, in this novella, is a lot of something unexpected, new, dramatic and even tragic. That’s why we started working on it from scratch.”

The stage sports a sand pit instead of the Sahara Desert, projectors take the place of stars and a picture of a woman instead of the rose that the Little Prince was in love with. The incredible decorations, numerous visual and sound effects deprive one of the feeling that there is only one actor on the stage.

Russian actor Konstantin Khabenskiy, plays the role of the narrator, a pilot whose plane has crashed in the Sahara desert. However if you watch closely, you will notice other Saint-Exupéry characters, such as a king, a conceited man, a drunkard and a businessman who endlessly counted the stars, all impersonated by Khabenskiy.

“Every interesting role and every interesting project is difficult, because it’s new. But it makes me conquer new peaks, it opens up new horizons to me,” says Khabenskiy.

However, he is not alone on the stage. About two dozens musicians – together with Russian conductor and violist Yuri Bashmet create a special mood of the performance.

“The music is created by a Russian composer Kuzma Bodrov, with the use of masterpieces written by Mahler and Brahms, says Bashmet.

“So the melodies are familiar to spectators, but they are not just a copy of world-famous compositions.”

While music score is new, the script is 99 per cent Saint-Exupéry‘s text. However, there is always a place for improvisation and interaction with the audience.

The authors say: in such a way the audience can give more thought to the things Saint-Exupéry wanted to tell us.

“After the first show in Sochi , the next performance will be in Moscow at the end of March, ahead of a tour of Russian cities and abroad,” says Euronews’ reporter Maria Korenyuk.