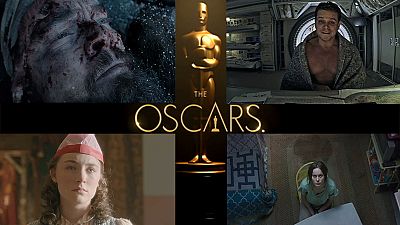 Welcome to our special Oscar edition. Eight movies are in the race for Best Picture. We present the contenders, this time four stories about strong women and men who defy fate.

Let’s start with this year’s heavyweight The Revenant – with 12 nominations and a main actor strong as a bear, Leonardo DiCaprio.

Hardly recognisable as a bearded trapper who is attacked by a Grizzly and left for dead by members of his hunting team, this huge physical effort could finally bring the long awaited Oscar for Best Actor to DiCaprio.

The movie by Mexican Alejandro Iñárritu shows the struggle for survival of a man literally crawling through nature to take revenge for the death of his son.

Iñárritu and cameraman Emmanuel Lubezki are also nominated only one year after the success of Birdman.

But is it possible to win the Oscar two years in a row?

Next stop the Oscars! 'The Revenant' gets a big BAFTA boost https://t.co/XmjifAFaTp

Matt Damon also has to fight for his life in The Martian as an astronaut who, during an emergency evacuation, finds himself left behind all alone on the planet Mars.

Space expert Ridley Scott stages a science fiction western which lives up to the genre, but in the end, is all to predictable.

Damon, alias Mark Watney, the outer space cowboy, takes it cheerfully in his stride, relying on his scientific instinct, producing water and self-fertilised potatoes – and succeeding in reconnecting with Earth.

This is the start of a nerve-wrecking countdown until his miraculous rescue, which the clever NASA experts have yet have to invent.

This is the fourth Academy Award nomination for Ridley Scott. He was previously nominated for Black Hawk Down, Gladiator and Thelma and Louise

The emigration drama Brooklyn with Saoirse Ronan is about an Irish girl who tries her luck in America in the early 50s.

It is a classic emotional Hollywood drama about the strive for happiness in the New World, where the dreary aspects of an immigrant’s life are rather left aside.

Young Eilis lets herself get carried away by her new life in Brooklyn and the relationship with her Italian-American boyfriend Tony.

But when she is forced to return to the Emerald Isle for her sister’s burial, she meets a promising Irishman, and doesn’t know anymore, where she belongs.

The Brooklyn stars are on stage to collect the Outstanding British Film award! #EEBAFTAspic.twitter.com/1XrrmEqI4e

Brooklyn recalls with neat nostalgic images the lives of Irish immigrants in New York, while concentrating on the interior evolution of its heroine gliding from one world to the other.

Ronan, nominated for best actress, is the great radiance of this movie.

Room with Brie Larson is the surprise candidate among this year’s star-studded Hollywood productions.

The abduction drama tells the harrowing story of a young woman who is locked-up and abused in a garden shed together with her small boy.

“Room” is a shattering but hopeful movie, because it tells the story of a liberation and the return to life.

That tiny space called Room is Jack’s whole universe, in which he grows up, lovingly surrounded by his mother’s tales.

But one day, they manage to fool their tormentor and escape.

For the young woman it is the long awaited and yet painful return to her former life. For young Jack it means the discovery of an outrageously large world, which we live through his eyes thanks to the acting of Jacob Tremblay.

Brie Larson is poignant in her role. This intense and touching movie based on the novel by Emma Donoghue is nominated in four categories: Best Picture, Director, Actress and Adapted screenplay.

The Oscars take place on 28 February in Los Angeles – follow the ceremony live with us. You will find all you need to know about the candidates in our Cinema editions and on our special Oscar webpage. Have a look!….